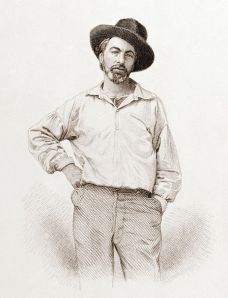 Walt Whitman would be delighted with all the attention paid to him on his birthday. In fact, I’ll go so far as to say that if he were alive today, he’d blog more often than Neil Gaiman, post more selfies than James Franco, and have more Twitter followers than Lady Gaga. Years ago when I visited Whitman’s home in Camden, New Jersey – now a museum – then curator Margaret O’Neill told me the poet was very concerned with how he would be remembered. So much so, he spent over $4000 on a memorial tomb that he designed for himself. (By today’s standard, around a million dollars.)

I came to Whitman’s poetry late – Dead Poets Society late. But more so ten years later when I read Gary Schmidgall’s biography Walt Whitman: A Gay Life. I made a two-part radio program featuring the author and my visit to the poet’s home. Since then, his poetry has often infused my work. But to be honest, I’ve never been able to sit down and read my battered 500-page copy of his epic life’s work Leaves of Grass from beginning to end.