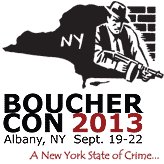 First thing I learned at Bouchercon? I was pronouncing it wrong. I assumed the name was from the French boucher, or butcher. A bit gruesome, if not inappropriate for a convention devoted to crime fiction. But, no. It rhymes with voucher. Bouchercon. Still doesn’t sound quite right. (Many years ago when I was a newsreader for Radio Netherlands, I received a letter from a listener in Seattle: “Mr. Swatling, why do you always adopt a French intonation whenever uncertain of the correct pronunciation? It is increasingly annoying. If you don’t know, you should ask someone who does!”)

Bouchercon is the Anthony Boucher Memorial World Mystery Convention. All you need to know about sci-fi editor and mystery writer Anthony Boucher is in a tribute essay by William F. Nolan. But a couple things caught my attention. He was active in college theatre, wrote book reviews for newspapers, and worked in radio for several years. Mr. Boucher and I have a fair amount in common. At Bouchercon I discovered many crime fiction authors had backgrounds in theatre and/or journalism. Me, too.

END_OF_DOCUMENT_TOKEN_TO_BE_REPLACED 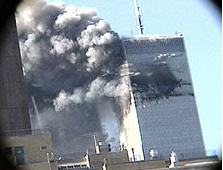 On a sunny spring morning in 1985, I walked downtown to the World Trade Center and took the elevator up to the South Tower Observation Deck. I had lived in New York City for ten years. The next morning I would fly to Amsterdam and this seemed the perfect way to say good-bye… Sixteen years later, I watched the towers fall on a television screen in an eerily quiet Dutch newsroom. Within a couple of weeks I tried to put my feelings into a radio feature. A few years later, authors were doing the same in their books. The following piece was originally written in 2005.