My first Guest Blog went live on the website of author Brandon Shire yesterday, perfectly timed as I attended ThrillerFest 2014. Brandon has a special interest in the issue of LGBT youth homelessness. So I wrote about how that subject connects to my novel. (Special Thanks to Brandon for the opportunity!)

In July 2012, with an early draft of my debut novel tucked under my arm, I pitched the story to agents interested in crime fiction at ThrillerFest in New York City. I always began the same way: “Amsterdam. Summer of 1995. I’m homeless, living in my jeep with my dog, Calvin. True story.” The rest didn’t seem to matter so much. “You were actually homeless?” they interrupted. A flicker of excitement appeared in their eyes. Could be a strong marketing tactic. Homeless author pulls himself from the gutter… But when I told them the homeless protagonist in the book was a young gay man, interest appeared to diminish. The agents politely asked me to send a submission, and several weeks later I received a series of encouraging rejections.

In retrospect, I wonder if the gay element was an issue at all. I’d like to believe it wasn’t – give the agents the benefit of the doubt. These were intelligent literary enthusiasts. It was entirely possible the manuscript just wasn’t polished enough, that I hadn’t finished the work needed to sell the book. I’ve learned a lot about the whole process of crafting a novel in the last two years. And four rewrites later, Calvin’s Head is set to be released by LGBTQ publisher Bold Strokes Books in September.

Dear Steven,
I know. You don’t like to celebrate birthdays. That probably goes double for this year. So I won’t dwell on it. I’m thinking about another celebration: the Gay Pride Parade in New York City. Come to think of it, you aren’t big on parades either. But maybe today is different. Maybe falling on your birthday, this year’s parade might tempt you from your country home to join the jubilation. I imagine you there with Dagmar, an exotic rainbow on your shoulder, marching to your own drummer. Or maybe not.

END_OF_DOCUMENT_TOKEN_TO_BE_REPLACED 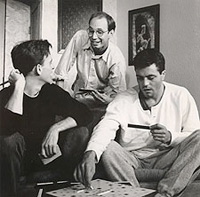