My plans for celebrating Stonewall 50 Pride began a year ago. I’d be in New York City where it all started, where I lived for ten years before escaping to Amsterdam. With the city hosting World Pride as well, I knew it would be epic. Grace Jones would be there. And Lady Gaga. Even Madonna. I booked Megabus tickets from Albany early–only a dollar each way! I ordered new Keith Haring designer sport shoes. I texted friends I wanted to meet up with. I was ready!

Then I got an email from my publisher. Bold Strokes Books was invited by a group called Queer Connect to participate in the first-ever Pride Parade and Festival in the small town of Bennington, Vermont. Interested authors should contact the events coordinator. But there was a catch­—a big catch! It was being held on the same dates as the big weekend in New York City. Nope. No way. Not a chance.

As my finger hovered over the delete button, I paused. I had family roots in Bennington. My mom was born there. I vividly remember early spring visits to my great-uncle’s maple sugar farm. My grandparents are buried in a hillside cemetery above town. Yes, I’d lived in New York and London, Los Angeles and Amsterdam. But deep down I was really a small town guy. Wouldn’t my presence at Bennington’s first-ever Pride have a greater impact than being lost among the faceless multitudes in the Big Gay Apple? Yup. For sure.

Early Morning at the Museum

At 10:30am I arrive at Bennington Museum—an hour’s drive from my mom’s upstate New York home. The museum is primarily known for owning the largest collection of paintings by local Vermont folk artist Grandma Moses. Today it’s hosting the first Bennington Pride Coming Out Story Slam, a perfect fit for this year’s theme: Coming Out and Coming Together.

“Stories are the way we see ourselves in other people.” Moderator Jen Jasper points to a whiteboard where a few names are written, and invites the two dozen or so attendees to add theirs to the list if they’d like to share. She kicks off with her own story of growing up in liberal Santa Fe, New Mexico. “I thought everyone was bisexual.” Not so for the first storyteller, local girl Amanda. She wanted to kiss a girl at age five. “But I knew it was wrong.” So she bullied girls to hide her attraction. When she finally told her parents she was bisexual, they simply didn’t believe her.

Up next is a more complex story. In third grade, D asked: “Can I be a boy?” In seventh grade, D discovered the word “gay” and determined: “I’m a lesbian.” The following year, D attended Camp Outright, a traditional Vermont summer camp for queer, trans, questioning, and allied youth. In ninth grade, D returned to school as a boy and was outed when someone told D’s mother, “I saw your son Leo.” D is now a fully out trans gay guy. “I really like guys,” D says with a broad grin. D is eighteen years old.

During the applause, several teens stand and add their names to the growing list. I also notice the size of the audience has doubled. Storytellers range in age from fourteen to sixty-four. The oldest is Evan, who explains there was no “common language” to describe himself during high school. So he remained hidden until 1996, when he saw a production of Paul Rudnick’s play Jeffrey, which featured a male-to-female transgender character. “That’s me in reverse,” he thought. “There must be more of me out there.” A year later, for the first time, he met another transgender person—at the age of forty-two.

“I came out as gender fluid on Halloween,” laughs Jamie. “I call myself an imperfect ally,” Gary admits. “When I told my parents, they were both totally cool with it,” shrugs Allison. “At thirteen, Mom said I was too young to know my sexuality,” says Sophie, before adding, “I have to come out a little every day.” As every story ends, the applause and cheers grow stronger. Jen gives each storyteller a hug and they return to the warm embrace of their community.

Don’t Rain on My Parade 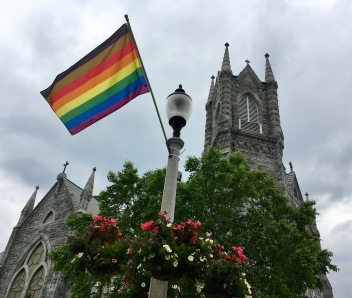 “I began my morning early, sipping coffee and looking at the rainbow flags on Main Street in a desolate town,” says Lisa Carton, a psychotherapist who has lived in Bennington for thirty years. “I got to watch the town wake up with pride as people started to gather.” As did dark rain clouds, but a little thunderstorm wouldn’t dampen Carton’s spirits. Early this year, she started Queer Connect, an umbrella group for all things LGBTQ in and around Bennington, Vermont. One of her goals was to organize the town’s first Pride Parade and Festival. “The desire for this was a bit surprising at times,” she says. “I knew we’d get support in various ways and happily, that grew.”

A brief shower comes and goes, as Parade participants meet at the Museum and Festival vendors replace locals at the Farmer’s Market. “I was driving from the museum back to the park,” says Carton. “And at the traffic light I saw a big black bus with STONEWALL on the front, fully decked out with flags and signs—my heart soared! I saw people dressed up along the street… Really—there’s no words.”

For Carton, the day just kept getting better. “There’s nothing like walking along Main Street with a bullhorn, announcing the first-ever Pride Parade and asking if people are happy to explosions of cheers! And people cheering the kids on their float!!” (Some who had shared stories that morning.) “And seeing my mom standing up though the moon roof of a Jeep, happily holding a rainbow flag she made. THAT was a surprise! There are so many ‘milestone’ moments!” 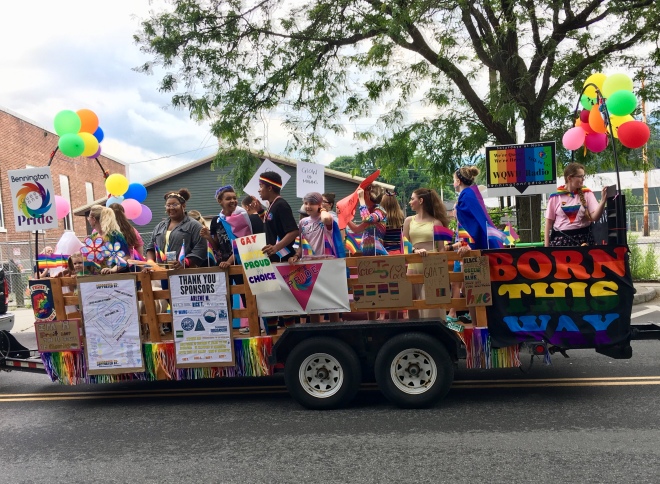 The parade ends at the Festival site where local LGBTQ artisans sell their rainbow candles, rainbow soap, and hand-printed T-shirts. I join fellow Bold Strokes authors Laney Webber, C. Spencer, and Renee Roman at our table by the creek, where we talk to avid readers, many of them teenagers. We even sell a few books. After a couple of hours, the teens head off to change for the evening’s Queer Prom to end the day’s festivities.

And suddenly it’s over. No big star-studded finale concert. No late night after-Pride bar-hopping. On Sunday afternoon there will be a Pride Picnic. Bennington is a small town, after all. Did I regret skipping Stonewall 50 World Pride in New York City? Absolutely not! Nor did Lisa Carton regret taking on the challenge of organizing her community’s first Pride Festival.

“It really did live up to all I had hoped for!” she says. “I believe support will continue to grow now that we’ve shown how it can be. And we will all ride this wave for quite some time!!!” And hey, I still got to wear my Keith Haring sneakers and will next year, too—when you should support a small town Pride Festival in your neck of the woods.

This bookish nook belongs to Meggy Roussel and her furry babies