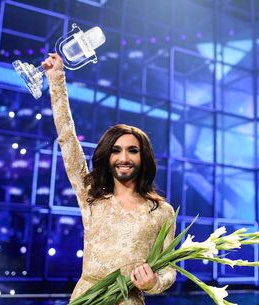 Watching the Eurovision Song Contest on my computer yesterday in the middle of a sunny afternoon in New Hampshire was odd. It’s the kind of live event for which people in Amsterdam and all over Europe have parties, or gather in bars to drink and scream at the television. It’s the most kitsch, gayest, pop-culture must-see TV of the year. And an audience of some 180 million people in 45 countries watched as a torch-singing bearded drag artist from Austria took home the coveted prize.

Here in the USA most people have never heard of Eurovision, or think it’s a brand of eyeglasses. And it’s hard to explain. “Like American Idol?” they ask. Um, no. I tell them it launched the careers of Abba and Celine Dion. “Like America’s Got Talent?” Nope. I try to make clear national pride is at stake, with a geopolitical element in the voting that runs parallel to the music competition. Their eyes glaze over in confusion. Not for the first time in almost thirty years of living abroad, I feel more than a little European.

END_OF_DOCUMENT_TOKEN_TO_BE_REPLACED 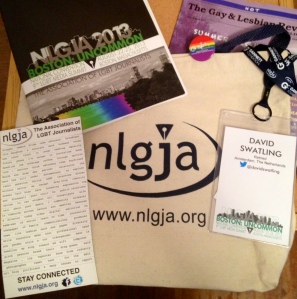 A talented gay comic book artist is told, “Your work is not publishable.” A stint with Marvel Comics, a couple of graphic novels, and translations of his work in several languages prove otherwise. A long-time editor is shocked to read the headline “Getting Old Sucks Even Worse for LGBT Seniors” on a popular gay website. So he creates a site for the over-50s. A man living in a particularly homophobic country loses his job for speaking with a journalist, who feels it’s his responsibility to help the man get back on his feet.

These are the kind of stories told at the National Lesbian & Gay Journalists Association (NLGJA) conference last weekend in Boston. A lot has changed in the LGBTQ media landscape since 1990 when it was founded. And everything you might want to know about the organization can be found on their website. (Except for the amusing fact that many members tend to avoid the unwieldy acronym and refer to it simply as simply “negligee”!)

END_OF_DOCUMENT_TOKEN_TO_BE_REPLACED 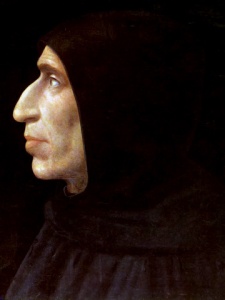 I got my first hate mail. Well, not actually mail and not my first, but I’ll explain that later. My first hate comment since I began writing this blog on LGBTQ topics in January was short and to the point: “Dirty fag.” I can’t say I was surprised, except perhaps that it took so long. (In seven months I’ve had over 3100 views by visitors from 67 countries.) One friend even noted it was a sign that I’m “reaching the right audience, and not preaching to the converted.”  True enough, and an apt metaphor.

The cowardly act of schoolyard name-calling was hidden behind a curious Twitter handle: Girolamo Savonarola. In case you’re not up on Italian Renaissance history, Savonarola was a 15th century Dominican friar who castigated the rich and powerful in Florence with fiery apocalyptic sermons. His reform campaigns included the infamous Bonfire of the Vanities, in which objects deemed “occasions of sin” were burned – masks and carnival gowns; playing cards and musical instruments; “immoral” books by Ovid and Boccaccio; paintings by Botticelli.

END_OF_DOCUMENT_TOKEN_TO_BE_REPLACED 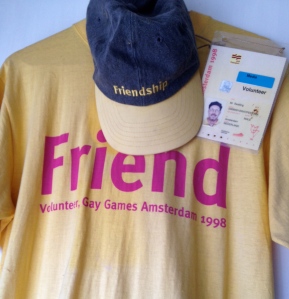 Amsterdam turned gay overnight. That’s what happened in 1998 when 250,000 gay and lesbian athletes and fans descended on a city with a population of only 720,000 in one fell swoop. Not only was it the first time the Gay Games were held outside North America, Amsterdam was the smallest city thus far to host the Games. So for eight days packed with countless events the European capital was clearly, and never more visibly, the Gay Capital of the World. It was unprecedented in every way.

END_OF_DOCUMENT_TOKEN_TO_BE_REPLACED 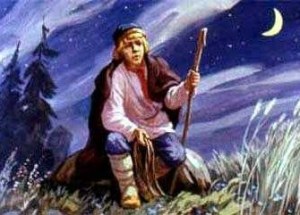 A week before Kris van der Veen was arrested in Russia, on suspicion of “promoting gay propaganda” to minors, he was reading about Ivan Dusak, or Ivan the Fool. A popular figure in Russian folklore dating back to the 16th century, Ivan is the youngest of three brothers who set out to seek their fortunes. Fairest of hair and bluest of eyes, Ivan is seen as simpleminded by his greed-driven siblings. But he follows his heart – always eager to help others, even if it puts himself at risk. Ivan’s naïve derring-do vanquishes the dastardly deeds of villains and wins the happily-ever-after love of princesses. Not such a fool after all. Kris van der Veen would be perfect casting.