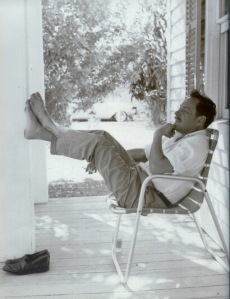 Birdsong greets the dawn in my friend’s back garden. No matter that clouds mask the rising sun. I’ve a party to get to, so I don’t have much time. It’s Tennessee William’s birthday and I’m celebrating in his “spiritual home” – New Orleans, that is – at the literary festival named in his honor. I don’t want to be late.

I attended the Tennessee Williams/New Orleans Literary Festival back in 2001, covering the event as a journalist for Radio Netherlands. It was my first visit to the city known as the Big Easy and I immediately fell under its spell, much like the young writer who arrived in 1938. Tennessee wrote his Mama: “I’m crazy about the city. I walk continually, there is so much to see.”

I returned in 2012 for two weeks to experience Mardi Gras, and again last year for the Saints and Sinners Literary Festival (see Diversity on the Mississippi). And this year I’m lucky enough to have it all. “We’re bringing our family of Festivals together to celebrate the literary arts,” says Executive Director Paul Willis. “Tennessee would certainly approve.”  Today there will be a Second Line parade through the French Quarter to honor Tennessee and next weekend I’ll still be here for some colorful Easter Parades.

“You know what luck is? Luck is believing you’re lucky.” – A Streetcar Named Desire

I’ll be especially busy on Saturday when at 11.30 I’ll moderate the Saints and Sinners panel called Historical Outings: Keeping It Real or Making It Up? Immediately afterwards I’ll be on the panel A Queer Kind of Mystery, and then at 4pm participate in the Reading Series. (I may read the same excerpt from Calvin’s Head as last year, now that it’s a Lambda Literary Award Finalist!) After that is a festival reception, followed by another reading program at popular gay bar The Phoenix. 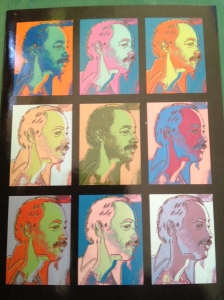 I’m looking forward to seeing all the friends I made at the festival last year, as well as making new ones. Which reminds me of a line Tennessee wrote that many years ago I found scrawled on a postcard pinned to the wall of the Dream Away Lodge in the Berkshire Mountains of western Massachusetts. I like to think he mailed the card from New Orleans himself. That’s probably not the case, but the sentiment is perfect as I set out in search of fellow writers and fans of America’s greatest southern playwright.

“When so many are lonely as seem to be lonely, it would be inexcusably selfish to be lonely alone.” – Camino Real

(Oh dear, it has started to rain. But that won’t dampen anyone’s spirits, I’m sure.)