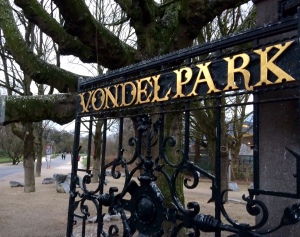 On Tuesday I got a message from a friend asking if I could account for my whereabouts after the book-signing event on Sunday. He attached a link to a local news story. A body had been pulled from the water in Amsterdam’s Vondelpark, very near the site of a similar crime scene almost twenty years ago – a crime scene that inspired my debut thriller Calvin’s Head. The book I spent Sunday afternoon signing. The book that begins with the grisly murder of a man called Valentine, whose remains are discovered in a Vondelpark pond.

So perhaps the macabre curiosity that led me to Vondelpark late Tuesday afternoon is understandable. By the time I arrived, a murky dusk had fallen and there was no sign of investigators or any crime scene. Police later reported that the death appeared to be accidental. A man had fallen into the water. Cause of death: hypothermia. So I was off the hook. No alibi necessary. 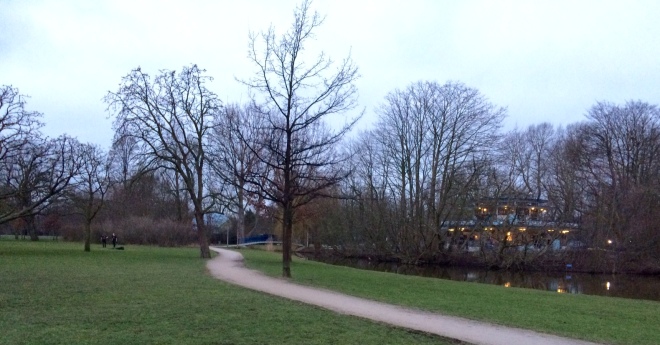 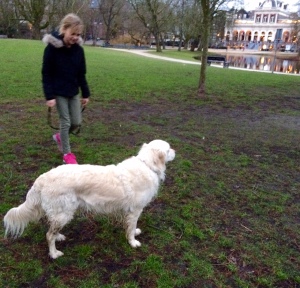 I did see something else in the park that sent a shiver up my spine: a young girl walking her big white golden retriever – the spitting image of my dear departed Calvin. He and I were homeless, living in my jeep during the summer of 1995, when we happened upon a crowd gathered by the rose gardens. Cops were dredging the nearby pond, talking to onlookers. Someone’s dog discovered the victim, or so I was told. According to a database of Dutch murders, the dead man was never identified and the murder remains unsolved. Except in my all too sinister imagination. 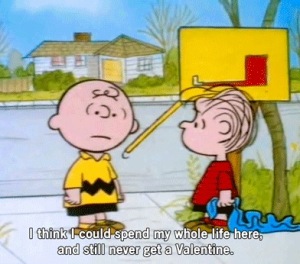 You don’t have to be a psychologist to draw some pretty obvious conclusions about an author who names the primary victim in his book after the year’s most romantic holiday. I trace my ambivalence back to Charlie Brown’s repeated visits to an empty mailbox every February. (Much like my difficulty in choosing a Christmas tree – Charles Schultz, you have a lot to answer for.) Not only did I decide to kill off Valentine Mackenzie in the opening scene, the method of his death echoes the horror of his martyred namesake. And if that wasn’t enough, I made him an author of homoerotic stories using the one-word nom-de-plume Valentine. 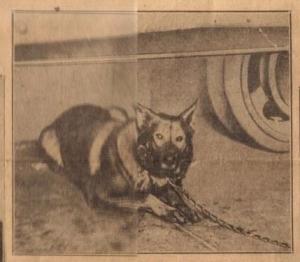 “Moonface couldn’t believe Johnny got mowed down on St. Valentine’s Day. Of all the dumb luck. He opened the Friday edition of the Chicago Herald Examiner to the photo page. There was Highball, cowering under a car, looking straight at the camera. That German shepherd loved Johnny May. He couldn’t go nowhere without that dog.” -from Calvin’s Head

Needless to say, I’ve no romantic plans for this Valentine’s Day. But tomorrow I’m going to the same local bookshop where I signed my books last weekend to meet comic artist Derf Backderf. He’s the author of a highly praised graphic novel about serial killer Jeffrey Dahmer. 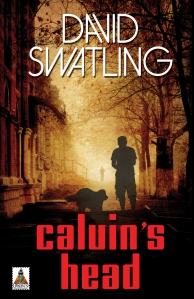 Calvin’s Head was released in September. I’ve been pleased and humbled with the positive response so far. Although I’ve been sadly remiss in keeping this blog up-to-date, the last few months have been full of excitement – not least of which was presenting the book at Iceland Noir in Reykjavik. Next month I’ll head back to New Orleans for the Saints and Sinners Literary Festival. And there’s a new book in the works. But all I’ll say for the time being is that there are definitely no Valentines in this one.

I had returned to Vondelpark last October to be interviewed for the Amsterdam Writer’s Platform, a series on local television. (See Video Below.) The location for the film shoot was a no-brainer. We returned to the scene of the crime. Little did we know that just four months later, another victim would be fished out of the narrow canal by the bridge at the very same spot.