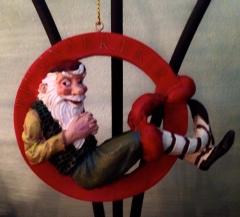 I woke early this morning, as I did when a child many Christmas moons ago. Perhaps I was hoping to meet Bjúgnakrækir, or Sausage-Swiper, the ninth of thirteen Yule Lads who visit in the two weeks prior to December 25, according to Icelandic tradition. He might leave a gift in your shoe, depending on whether you’ve been naughty or nice. But mostly he hides in the rafters waiting for the chance to steal one of your smoked sausages. The Yule Lads are the original Bad Boys of Christmas.

In Icelandic folklore, the criminally inclined Yule Lads were the sons of terrifying mountain trolls who feasted on children. (Merry Christmas, kiddies!) But by the early 20th century they’d evolved into mischievous pranksters – with some help from poet Jóhannes úr Kötlum, Iceland’s answer to the Brothers Grimm. I discovered the Yule Lads in the airport as I was leaving the lovely city of Reykjavik last month, after an inspiring crime fiction weekend.

How I came to be there relates to my last post (I know. Twelve weeks ago. Life.) At Bouchercon 2013 I met Yrsa Sigurdardottir at a reception for international guests. I quipped we were practically neighbors, relatively speaking, and she invited me to Iceland Noir. I didn’t realize then that she was one of the organizers, along with fellow crime fiction writers Ragnar Jonasson and Quentin Bates. Being their first venture, the aim was to keep it small. But one day became two became four, and suddenly the whole festival was sold-out. I booked a spot in the nick of time.

I missed the first evening of interviews, readings, and a screening of Ann Cleeves’ Shetland TV pilot (Great series! I saw it on BBC at home earlier this year.) I did make it to Friday’s excellent crime writing workshop with Irish author William Ryan at the Reykjavik City Library. And Saturday was the main event with a full day of author interviews and panels on a wide variety of topics at the picturesque Nordic House. (According to director Max Dager, there’s a ghost in the basement. Ghosts are an important element of Iceland’s rich literary heritage.)

The first panel – “What’s so special about the North?” – might have been the theme for the whole day, since the focus of discussions was not simply on Icelandic crime fiction. In fact, compared to other Scandinavian countries, Iceland came to the genre rather late (1996), which is not so surprising when one is told it has one of the lowest homicide rates in the world (two per year!) On the other hand, author M.J. McGrath sets her books in the Arctic where the murder rate is very high.

Everyone agreed that an important factor in Nordic crime writing is the climate – the cold, the long dark nights, the “winter in my soul,” as one writer put it. The weather and the location are frequently characters that drive the story. Sabine Thomas, who organizes a crime fiction festival in Munich, noted that the Germans say their bad weather comes from Iceland and their interest in crime novels from their northern neighbors developed earlier than other countries, especially Britain and the United States.

“If you’re English, pretend to be Scandinavian”

While visiting London back in January 2012, I read an amusing piece in Time Out magazine: How to Write a Nordic Bestseller by Barry Forshaw. He was, of course, referencing the success of Scandinavian crime fiction. Since I’d completed a first draft of my own psychological thriller set in Amsterdam a few weeks earlier, I ripped out the page and saved it. I never imagined I’d be in Reykjavik two years later for Iceland Noir.

I’m definitely planning to return next year with my debut crime novel in hand. I mean, Amsterdam could be considered a Nordic location, couldn’t it? It’s on the North Sea, after all. And just for today, if I happen to meet a Yule Lad known as Sausage-Swiper, I might introduce myself as Dalvin Hrafnarson. 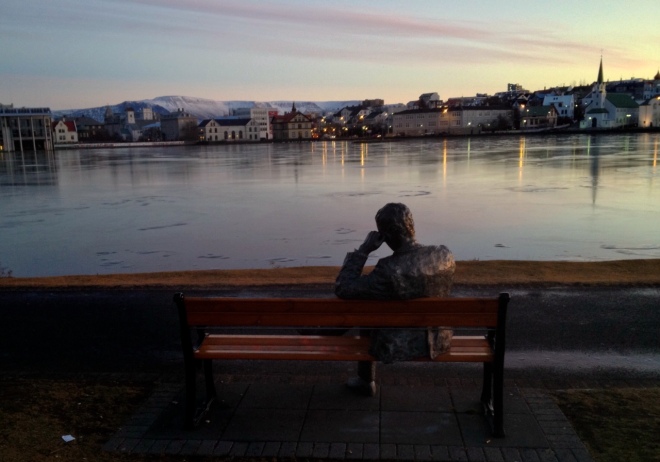