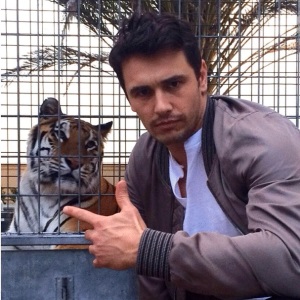 I couldn’t help but smile at year’s end when the Arts section of the New York Times published an essay by James Franco called The Meanings of the Selfie. It followed a November announcement by Oxford Dictionaries that selfie was their international Word of the Year 2013. Old news now, with the lightning speed of the information highway. But together the stories had a full-circle resonance for me. I began the year with a determination to pave new paths in social media. And almost everywhere I turned, James Franco popped up waving a checkered flag.

I came late to the Franco Fan Club. I’d missed his turn as James Dean, his Spiderman movies, and the stoner comedy Pineapple Express. I first saw him in Milk, when he played gay activist Harvey Milk’s young lover Scott Smith. This was early 2009, about the time a college friend invited me to join Facebook. It was his performance a year later as beat poet Allen Ginsburg in Howl that really grabbed me. The last documentary I made for Radio Netherlands explored the same material (An Angel-headed Hipster’s Howl) and I felt a strong connection to the poet, the film, and the actor.

I retired from radio and spent a year travelling, a highlight being the 2011 Venice Biennale. I heard a rumor that James Franco was there. Although I’d come for the art, I spent as much time scanning the art-crowd in hope of spotting him, maybe even meeting him. No such luck. I’d have to settle for following him on Facebook

With a third draft of my debut novel completed, I took time to set up an Author Site (including a Blog) via WordPress, and join Twitter. At an excellent craft workshop at Thrillerfest 2012 called Buzz Your Book, M.J. Rose supplied helpful hints on how to approach both forums. Very quickly one social media connected to another, a virtual cross-pollination of ideas and posts.

Right away I found James Franco in the thick of it. At the Sundance Film Festival in January, the premier of his quirky queer documentary Interior. Leather Bar provoked a firestorm of heated discussion. Raising questions about art and gay porn, without necessarily answering them – a surefire way to attract attention. But one big question kept him busy for most of the year: Was James Franco gay? Many celebrities face such queries with trepidation, horror, or outright antagonism. But Franco reveled in sexual ambiguity, defended his fascination with queerness, and photographed himself in increasingly provocative situations. No one’s hashtag was busier than his.

I saw Interior. Leather Bar in March at Amsterdam’s  Rozefilmdagen, or Pink Film Days. Franco didn’t accompany his film (another missed meet-and-greet opportunity.) Advance word of mouth meant the screening was packed, but it wasn’t the kind of documentary many expected – myself included. However, I was not disappointed. I love stylish thought-provoking films and this one had my mind spinning. I intended to write something about it for my blog, but instead became consumed with a new issue that was brewing in the Amsterdam LGBTQ community.

Queering Vladimir Putin was my first in a series of posts about developments concerning the anti-gay propaganda laws in Russia. It was also the post that put my blog on the international map. Not exactly viral by James Franco standards, but not bad for an as yet unpublished author blogging less than four months. I realized how tapping into an important issue early and continuing to write about it broadened social media horizons. I tried live-tweeting the Amsterdam protest during Putin’s visit, but that was less successful. Still, another good lesson learned. 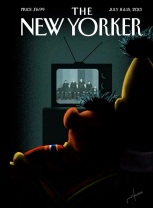 Two months later I was in northern New Hampshire trying another experiment. I woke early on June 26, turned on the television to a news network, and began writing as I waited for the Supreme Court ruling on the Defense of Marriage Act. It was an attempt at live-blogging. Again, an interesting process – excitement increasing moment by moment and a spectacular climax when the announcement came. But I wasn’t convinced by my efforts, especially with such eloquent coverage elsewhere – my favorite being the cover of New Yorker magazine.

James Franco spent the month of June gracing the cover of GQ magazine’s comedy issue, with a series of fashion shots that bolstered his image as playful provocateur. This was further strengthened when Comedy Central choose him for their televised Labor Day Weekend Celebrity Roast, which I watched with a degree of discomfort. Franco had been indulging his queerious nature all year, with varying degrees of seriousness or humor. But always with respect. Some comedians not so much. Franco took it all in stride and emerged with his popularity on social media intact.

I’d pretty much lost track of him during the summer, my on-and-off preoccupation overshadowed by an exciting new development. I was offered (and subsequently signed) a contract with Bold Strokes Books for publication of my debut novel, Calvin’s Head. I wrote about the inspiration for my psychological thriller in June (Murder Most Queer) and now my focus on social media took a backseat to attention toward the book’s planned release in Fall 2014.

Upon returning home to Amsterdam in November, I was asked to submit ideas for the cover design of my book. Funny enough, I’d just seen an article called Let’s Put James Franco on All the Book Covers. I tweeted the link to my publisher and received a short reply: “LOL! No.” Ironically, while working on the book back in 2012, I’d imagined a film version. Who had I cast as the protagonist? James Franco, of course. Little did I realize the actor would appear in nearly a dozen 2013 films, with as many more to come in 2014, according to the Twitterverse this week.

Last summer Franco cast himself as Janet Leigh’s character in Psycho, recreating Hitchcock’s iconic murder scene for an art installation. (He explained why in The Guardian.) Clearly we share a queerious fascination with psychological thrillers. Not to mention art, poetry, and social media. I look forward to what new adventures a new year will bring – for both of us. And for you, too!

One thought on “Isn’t It Queer? A James Franco Year”