(Exactly one year ago I was on Fire Island for the first time, at the invitation of my friend Kate McCamy. Why I never got there during the ten years I lived in NYC is another story for another time. Kate’s first visit was somewhat more eventful than mine, and I’m pleased to have her tell the tale herself as my first Guest Blogger.) 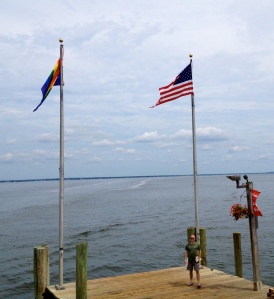 No summer is complete without a few days of toes in sand and hopelessly tangled salty hair. My beach of choice is Fire Island, Cherry Grove to be specific. My older brother from another mother and upstairs neighbor has rented a house in August for nine years. I’m fortunate enough to stay in his good graces and get invited for birthday fun in the sun a few days every summer. There is nothing like the crackle of anticipation as the ferry slows to approach the dock, rainbow flags flapping in the breeze.

The stress of life falls off me as I roll my suitcase along the bumpy boardwalk. I pass homes with fantastic names like House of Orange, Over The Rainbow, festooned colorful decorations ranging from baby doll heads to a cornucopia of all things sexual. Such is life on the Grove, a different country with it’s own customs and language. The queen of the island is the Belvedere, a Venetian castle built in the ‘50s out of former stage sets. It sports more statues of David than a Florence souvenir shop and trompe l’oiel everything. The first hotel in the country exclusively for gay men, their website states no woman has ever crossed its threshold. This is not true.

We got married on Friday the 13th (Spoiler Alert!) My newly minted husband asked a travel agent friend where we should go for a few days once the guests left. She suggested the Belvedere because friends who went to Fire Island often told her it was fun. He called and made a reservation for two nights. Supposedly a surprise, I had a suspicion we were going to a beach due to the nature of what he suggested I pack. Also, the shopping cart our bags were stuffed into by the front door. All the commotion of many guests in and out for weeks had made our cat cranky, which he demonstrated by pissing on the bags. We didn’t notice until we unpacked the car at the ferry.

Side Bar: I booked a gig as videographer for a Prince’s wedding in Riyadh, Saudi Arabia. Men and women have to party separately so a woman was needed to video the princesses. The day we left for our honeymoon I stopped by the company that hired me to give them my passport info and was handed the “rules.”  I read the list in the car as we drove east on Long Island: Women must be accompanied by a man and wear the abaya in public; no drinking, smoking, or driving; no using gyms. Penalties range from instant deportation to death. I wondered how much I’d enjoy spending a week in such a country where women were so subjugated. But what did I care? I was off on a two-day honeymoon! 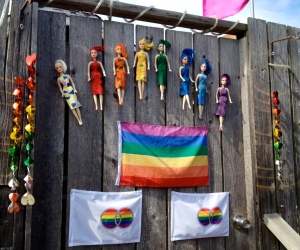 When the ferry docked at Cherry Grove, the sun was setting, the twinkle lights glowing: a magical fairyland. Neither one of us had been there before or had any idea what a fairy land it was. A light summer drizzle began as we rolled the cat piss cart along the boardwalk, laughing at the decorated houses and looking forward to cracking open a bottle of champagne. It was apparent that this is an extremely “happy” place. In fact, we were the only straight people there. We both worked in the theatre so the gay world was nothing new. I mused to myself, This is probably as opposite as you can get from Saudi Arabia! We arrived at the gates of the Belvedere, guard lions on either side, passed the chapel, and I waited outside, afraid they wouldn’t let us in with our acrid bags.

The deer-in-headlights shock on the manager’s face when I did walk in made me suspect something was gravely wrong As if out of a French farce, he stepped aside to reveal a sign: MEN ONLY. I doubled over laughing, a little stoned and a lot not surprised considering my boneheaded husband. We name dropped every gay playwright we knew, in a pathetic attempt to say, “We don’t care, we can pass.” Being a slow rainy midweek night, they took pity on us. We were taken up to the Ludwig II Room, with it’s own private balcony so I’d be kept hidden. I was told the “rules.”  No dresses, hair tucked in hat, use the back door. We had to share a bathroom so it was suggested my husband do recon before escorting me down the hall. Why was this sounding so familiar? I had a decision to make. Do I swagger or mince? I opted to mince and left the swagger to the straight guy. 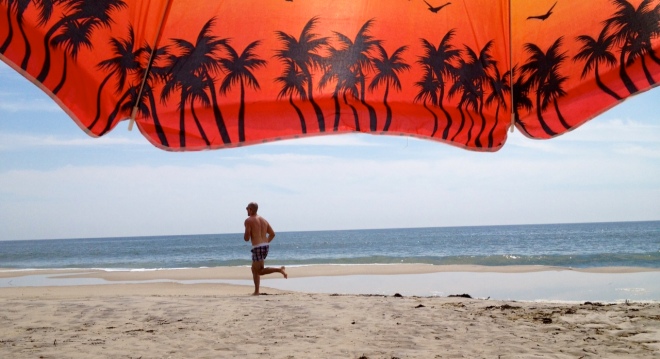 The next day we went to the beach while the boys at the hotel looked into an alternative place for us. “And for god sakes don’t tell anyone we let you stay here!” We ran smack into my fairy Godfather Peter, the man who taught me to cook. When I told him where we were staying, he threw up his arms and said, “Oh, you are NOT!” Oops. He announced an Emergency Cocktail Party at his place that evening.

We went to fetch our fetid bags from the hotel and Peter had a word with John, the owner. Suddenly we were given the red carpet treatment. A bellhop led us to the Cupola Room, which was huge, with it’s own bathroom, and conveniently located by the back exit. He confided, “The only other woman ever to set foot cross the threshold is John’s mother – only once and a long time ago.” We were a hit at the Emergency Cocktail Party that evening. The lesbians were dying to hear what it looked like inside.

A death in the royal family postponed the wedding and I never traveled Saudi Arabia to be subjugated. My marriage lasted barely two years, 9/11 and an affair ending it. Despite several hurricanes, Cherry Grove thrives. The Belvedere still stands and every time I pass by on my way to get my feet sandy I chuckle. I know exactly how much faux marble is inside those pearly gates, and no summer is complete without the memory of my amazing gay honeymoon on Fire Island.

Kate McCamy is a writer/filmmaker who splits her time between NYC where she grew up and the Hudson Valley where she walks Swee’Pea. Her play The Bridge won the Best Short Award at the 2013 Downtown Urban Theater Festival.