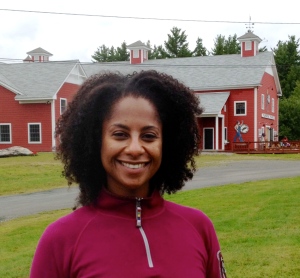 Nicole Lewis flashes a mischievous grin as she hands me a plate of freshly made blueberry oatmeal pancakes. “I’m warning you. They’re very healthy.” It’s not my usual breakfast of coffee and a cigarette, but change is good. Nicole and I agree on that. It’s part of why we’ve become friends. We met when she arrived in New Hampshire in June to direct a play at the Weathervane Theatre. I arrived a month earlier to visit my college friend Joanne who owns the Inn at Whitefield, right next door.

This quiet Sunday morning we have the place to ourselves, a place of memories for each of us. “In 1995 I turned 21 right here at the Inn,” she laughs. “I had my first tequila shot with Joanne.” I could tell her stories about Joanne and I, back in the days when it was legal to drink at 18. But I want to learn more about Nicole. It’s her story I’m waiting to hear, a story about love and transformation.

Nicole was born in Manhattan, grew up in suburban Queens, and went to Bronx High School of Science. She was a clever girl with a secret passion. “I was a closet musical theatre nerd,” she admits. “My grandfather loved musicals. We went to one Broadway show each year, and I would be on the edge of my seat. My parents let me go to musical theatre summer camp when I was eleven. However they were determined I was going to be a doctor or lawyer – something ‘professional.’ I applied to colleges to study biology and pre-med, but I chose Yale for the theatre. When I first visited the campus, students were singing in the streets. I thought: This is where I want to be!” 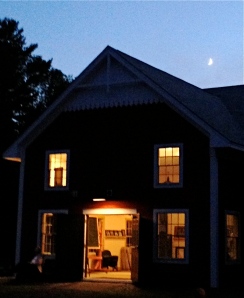 It wasn’t long before she was switching from science to theatre classes. In her sophomore year she got her first big role in the musical Once on This Island. Set in the Caribbean (where Nicole’s family is from) it tells the story of the peasant girl Ti Moune, who brings people from different social classes together through the power of love. A few months later, artistic director Jacques Stewart spotted the young actress at the StrawHat auditions. He invited Nicole to the Weathervane to play the role again.

“I was excited – 20 years old and looking for adventure,” she remembers. “That old barn – rafters, wood beams, bats – it was magical. The musical is transformational because the ensemble tells the story and they take on different roles. But it was also a transformative year for the Weathervane. Jacques had chosen shows that brought a racially diverse company together, what he calls a ‘rainbow company.’  It started a new tradition at the Weathervane. I’ve always felt embraced and loved here.”

Nicole returned for the ‘97 Weathervane season, which included Ain’t Misbehaivin’ and Children of Eden. She went to San Francisco for three years of graduate school at ACT, and then moved back to New York to pursue her career. She found an agent, did showcases, and was cast in an exciting production called The Laura Nyro Project (directed by future Tony Award winning director Diane Paulus.) But she developed vocal problems that forced her to drop out of the project.

In fact, she decided to leave show business completely and found work as a waitress, a bartender, a bar manager. “I learned a lot about Scotch,” she says with a wry smile. She got a job as a hedge fund assistant, considered going back to school. She didn’t know what she wanted to do with her life. Then Nicole bumped into Jacques Stewart again. The Weathervane was planning to do The Wiz for their 2004 season. Would she like to play Dorothy?  “I had always wanted to play that role! Whatever I ended up doing, did I want to die having passed up this opportunity?” She quit her job, with no guarantee of getting it back, and just like Dorothy, returned “Home.” 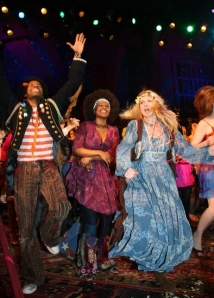 Nicole began directing as well, returning to the Weathervane in 2011 to stage the play Race. This year Jacques asked her to direct the comedy Circle Mirror Transformation. She was in rehearsals when Jacques had another request. A company member was returning to New York. Might Nicole be willing to step into the Sondheim review, which opens in two days? Of course she would! And also take on a role in Once on This Island? Hmmm.

“It’s interesting to re-imagine myself in the show,” she muses two days before rehearsals begin. “Now I’m playing Asaka, Mother of the Earth. She’s all knowing. ‘Let me guide you,’ she says, ‘and I’ll protect you on this journey.’ I’m beginning to see myself as that person in life now, guiding actors. I concede that I don’t know all the answers, but I do know I’ve gained experience from having a few years under my belt.” 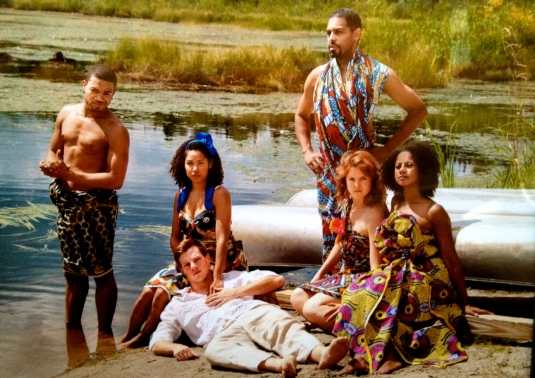 Nicole (r) & 2013 Weathervane company of Once on This Island (photo: Mark Winter)

Why We Tell the Story

And she stands against the lightning and the thunder
And she shelters and protects us from above
And she fills us with the power and the wonder of her love.

“It’s love that crosses race lines, class lines – and I believe in that. I think there’s a reason I’ve done those Broadway musicals – Lennon, Rent, Hair – they’re all about love, how love transcends everything. It’s the way I express my creativity. And for me, Once on This Island started that process of storytelling that brings people together through love. I know this sounds so Pollyanna, but I believe that’s what the Weathervane is about – bringing a community together.”

I ask if she realizes that Pollyanna was written in the nearby town of Littleton. Her eyes widen in amazement like young Ti Moune, and then she throws her head back and laughs like Asaka, Mother of the Earth. Nicole Lewis has come full circle at the Weathervane.

(Note: The section headings are song titles from Once on This Island. You can click on them to hear original Broadway or London cast recordings.)

Nicole in White Boys trio from 2009 Broadway revival of Hair:

One thought on “Love & Transformation”