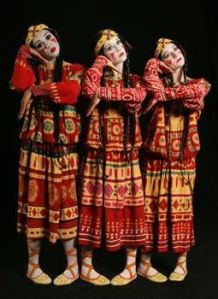 Everything was beautiful at the ballet. Romantic melodies by Chopin, graceful sylphs shimmered in white, Russian dreamboat Nijinsky danced in the moonlight. The first act at the brand new Théâtre des Champs-Elysées was what everyone expected. But as the music of Igor Stravinsky’s Le Sacre du Printemps (The Rite of Spring) began the second part of the program, the audience twitched, twittered and turned hostile.

“One literally could not, throughout the whole performance, hear the sound of music,” said Gertrude Stein (who actually saw the second performance four days later.) Popular composer Puccini (also attending the second night) called the music cacophonous, “the work of a madman.” Suddenly everyone who was anyone in Paris wanted to see what kind of ballet had caused a riot in the theatre on its opening night.