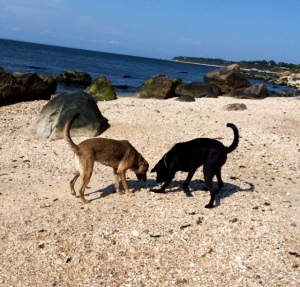 The dog days are done. They arrived somewhat late a month ago while I was still in northern New Hampshire, followed me to New York City and out to Long Island’s North Fork, back up to Boston and across to upstate New York. Now in Brooklyn, I’ll soon head home to Amsterdam. For me the dog days of summer correspond to the seasonal transition from one place to another – and not only geographically.

Ralph and Gypsy in the White Mountains, Swee’Pea in the Catskills, Jackson and Lily in Clifton Park, Max at Mirror Lake, Parker and Monk on Long Island, and Leo in Brooklyn. Connect the canine dots and you’ll find a dog days map of my summer journey, roughly shaped like the constellation Canis Major. “He really likes you,” I’m told again and again. It’s reassuring to know I’ve not lost my empathic bond with the descendants of Sirius, the Dogstar, brightest beacon in the night sky. 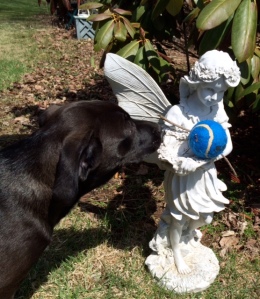 During this last month of bus tripping around the Northeast, I began reading (appropriately enough) Travels with Casey by Benoit Denizet-Lewis, a journalist whose work appears regularly in The New York Times Magazine. The book chronicles his cross-country RV journey into “the heart of America’s relationship with dogs” with his steadfast, if moody, Lab companion Casey. “I don’t think my dog likes me very much,” he confesses to a Manhattan psychoanalyst who specializes in human/pet problems such as transference or displacement. I can well imagine Calvin’s disgruntled reaction to any stranger offering therapeutic advice on our admittedly codependent relationship. 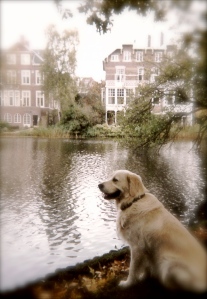 Many will know by now that Calvin is the title character of my debut suspense novel Calvin’s Head. Right off the bat, I should say something about the disclaimer that appears on the copyright page of every work of fiction. You know the one:

“This is a work of fiction. Names, characters, places, and incidents are the product of the author’s imagination or are used fictitiously.”

This is accurate in every way except one. The dog that appears in the story is as true to the late great Calvin as I could make him. There’s almost nothing Calvin does in the book that he didn’t do in real life. Almost. But even in the fictitious bits, Calvin reacts as I imagine he would in such situations. I wasn’t so much creating a character as channeling one. So it comes as no surprise that many early readers have mentioned Calvin is their favorite character, just as I found the antics of Casey more engaging than his likeable self-deprecating human companion.

There is one other real-life figure in Calvin’s Head: Dutch artist Vincent van Gogh. Although it might’ve been easy enough to create him as a character by reading the vast number of long detailed letters he wrote to his brother Theo, other family members, friends and colleagues, van Gogh isn’t so much a character in the book as a subject – in particular of the protagonist’s thesis, which brought him to Amsterdam.

In one letter to his brother, van Gogh compares how his parents treat him to how they would treat a dog, preferring to board him in a kennel than have him in stay in their house. But in his next letter he takes the idea in a different direction.

“I have found myself – I am that dog… The shaggy sheepdog I tried to portray for you in yesterday’s letter is my character, and the animal’s life is my life… but, man or dog, I shall be a painter, in short a creature with feeling.” (18 December 1883) 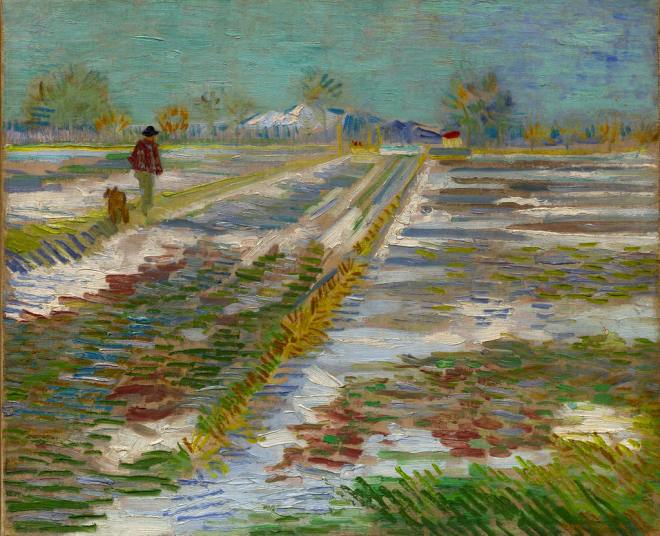 Five years later, tired of the cold Paris winter, Vincent moved to Arles in search of spring. Upon his arrival, he discovered the countryside was still covered with late snow and painted a landscape that I recently saw for the first time. In a field of muted greens and blues, with touches of yellow and red, a farmer walks through the snowy furrows toward home, accompanied by his dog. The painting is not far from me now, in the collection of New York’s Guggenheim Museum. If I’d discovered it three years ago, perhaps it would be in my story, along with references to other works by the artist – most notably Starry Night Over the Rhone, less famous but no less evocative of Vincent’s Starry Night works. Dekker, the distraught protagonist in Calvin’s Head, shares van Gogh’s fascination with the stars.

“I lie in the grass physically exhausted, emotionally drained, staring up at the starry starry night. I search for the great hunter Orion, traversing the sky as he has for countless millennia, his dogstar Sirius trailing at his feet. I won’t find him on this shortest night of the year. The daylight skies are his summer hunting grounds… I can’t bring myself to look at Calvin but I feel his luminous presence beside me. If I died right here, right now, he would keep watch over me, through the night and forever, my faithful dogstar.” 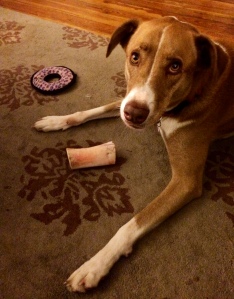 Now as the autumnal equinox marks the beginning of shorter days and longer nights, Orion again rises in the predawn sky, his three-star belt pointing the way toward Sirius and the horizon. And yes, it’s the arrival of Sirius that signals the end of the Dog Days – which also marks the propitious release of Calvin’s Head.

There is much more to say about all that, but Brooklyn Leo is due back from doggie-day-care soon and will want my undivided attention. Seasons my change but some things do not. And I don’t need a therapist to get my priorities right. Woof!