The Inn at Whitefield

The Inn is quiet again but for the rat-a-tat-tatting of rhythmic rain on the roof, Mother Nature’s own percussive washboard. It was a musical weekend with New Bedford band Pumpkin Head Ted visiting the North Country. Morning coffee on the terrace was accompanied by strumming of an acoustic guitar. A noontime flute trilled along the upstairs hallway. Hours before customers arrived, an impromptu session filled the pub with gentle harmonies. But I’d been thinking more discordant thoughts.

Back in April (back in Amsterdam) I wrote about a demonstration in support of the Russian LGBTQ community against the impending draconian anti-gay legislation. The piece Queering Vladimir Putin struck a chord with people all over the globe.  I received words of gratitude from activists in Russia and elsewhere for bringing attention to the then under-reported issue. By far my most popular blog post to date, I was glad to have put my activist boots on again. Until last week. 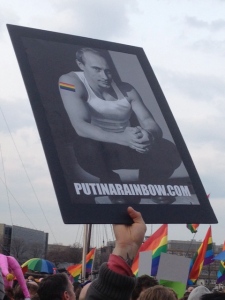 Back in the Closet

The new anti-gay laws criminalizing not just open discussion of LGBTQ issues but any public display of same-sex affection – yes, that would include holding hands – were passed by the Russian parliament unanimously, 436-0. Finally, the mainstream media took notice and widely reported the Duma’s action, or perhaps I should say, demand for inaction. Pro-gay posts on Facebook, Twitter and other social media are not exempt from prosecution. I assume even writing about the situation here means I shouldn’t plan a trip to Moscow or St. Petersburg any time soon.

In case you somehow missed the news, human rights activist Peter Tatchell contributed a searing piece for the HuffPost UK Politics Blog. One paragraph in particular caught my attention: 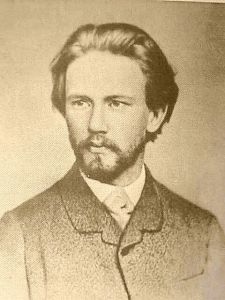 “There is a fear that people may be liable to arrest and prosecution if they mention the homosexuality or bisexuality of great Russian icons such as the composers Peter Tchaikovsky and Modest Mussorgsky, film-maker Sergei Eisenstein, the novelist Nikolai Gogol and dancers Nijinsky, Sergei Diaghilev and Rudolf Nureyev. Under the new law it will be risky for Russian people to publicly acknowledge and affirm the ‘non-traditional sexual relations’ of some of the greatest Russians in history.”

It’s clear to me now that the process of cultural whitewashing had already begun. In early March, a month before the demonstration in Amsterdam, the world bid farewell to the legendary pianist Van Cliburn, winner of the first Tchaikovsky International Competition. The brilliant musician who warmed the hearts of both Americans and Russians at the height of the Cold War was a devout Baptist, a devoted Republican, and gay. In a letter of condolence read at his funeral service in Texas, President Putin called Van Cliburn “one of the most outstanding musicians of modern times.”

“Over the course of many years, during the most difficult of historical times, the art of Van Cliburn brought together people from different countries, different continents, and united them. He brought the light of kindness, fairness and faith in the power of art …We shall always remember Van Cliburn as a true and sincere friend of the Russian people.” – Vladimir Putin

Right. Only not as a gay artist, whose fairness and faith would surely not extend to the proponents of violence against his own kind. What might he say to those who would demand silence regarding a common bond he shared with the composer he loved, not to mention his longtime companion? We can hope that pop artists like Madonna will continue to speak out for gay rights in Russia, as she did last year during concerts there. Or with the latest laws in place also applying to “foreign agents” will anyone risk breaking the silence?

Enough ranting. I want to get back to the music, which relaxed me so much this weekend. When Tchaikovsky was composing The Nutcracker in 1891, he discovered a newly invented instrument in Paris perfect for the dance of the Sugar Plum Fairy, and introduced the “divinely wonderful sound” of the celesta to Russian audiences.

This weekend Pumpkin Head Ted’s Tom Short introduced me to the curved soprano sax, which looks like a mini alto or tenor sax. I only knew the straight variety (no pun intended!) but the curved version, popular in the 1920s, is having a renaissance due to technical advancements. Guitarist and washboard specialist Jason Smith told me about the joys of digital guitar tuners built right into the instrument. I’ve been away from music and musicians for too long.

Perhaps that’s what brings me back to The Inn at Whitefield. Aside from being next to the Weathervane Theatre (opening a summer season of musicals next month) the Inn is owned by my dear college friend Joanne, with whom I did plays and musicals once upon a time in New York. How she ended up here is another story related to LGBTQ issues – another story for another time. It was just great to hear her sing with her old friends Pumpkin Head Ted. And my week of musical ups and downs is reflected in the lyrics of the classic T-Bone Walker blues tune that she loves to do with them.

“Call It Stormy Monday (But Tuesday Is Just as Bad)”